At the height of the summer season it was broad daylight at 5:30 a.m.  Now as I drive out of the garage and head for the train station at that time, the darkness is broken by front porch lights and street lamps.  A reminder that the days have grown shorter.  The commuter rail platform is awash in the ugly yellow glow from lights dotting the ceiling of the brown wooden arcade that offers skimpy shelter to commuters in inclement weather.  I no longer hear Cardinals singing out their territories.  Summer has moved on. The leaves are turning.  Autumn is here. 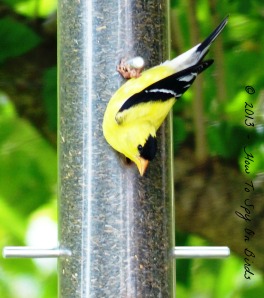 A mature goldfinch, like this male in his summer breeding finery, can “hang around” comfortably munching on seed from a species-specific feeder.

It’s when the “Cinnamons” arrive.  That’s my nick-name for the late-summer / early autumn cinnamon-colored American Goldfinch fledglings that appear at my feeders.  They are the noisiest fledglings!

With olive-colored plumage during winter, adult Goldfinch males molt into bright yellow with little black caps in breeding season.  Females retain their olive feather coats year-around.  The adults take their turns at the feeders.  The peace is broken when cinnamon-colored youngsters follow their parents to the feeders.

Goldfinches nest later in the season than most birds.  It’s later in the year when their favorite silky plant fluff for nests and thistle for food are abundant in the fields.  Their August and September fledglings are just beginning to learn the ropes while the springtime avian young are fairly well on their own emerging as young adults. 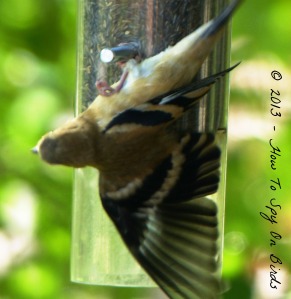 Oops! A common sight as the season’s youngest learn how to negotiate a Goldfinch feeder.

The young Cinnamons are unsure of their footing.  Many a time they try but are unsuccessful mimicking the adults who casually hang upside down for minutes on end from the specialized Goldfinch feeder.

The little ones belly flop over the side of the perch just to find they haven’t mastered the art of clinging.  They flutter back to a tree branch.  Frustrated, they call more loudly, “Mom!  Dad!  Do you expect me to be able to feed myself?  Feed me!”

This fledgling American Goldfinch, wearing its juvenile cinnamon feathers, is getting the “hang” of munching Nyger seed from the Goldfinch feeder.

I love watching the Goldfinch youngsters.  Cinnamons.  They’re vocal and insistent.  They beg food from any winged adult nearby — parents or not.

As the season moves on, they become more sure-footed and begin to comfortably cling upside down at the feeder.